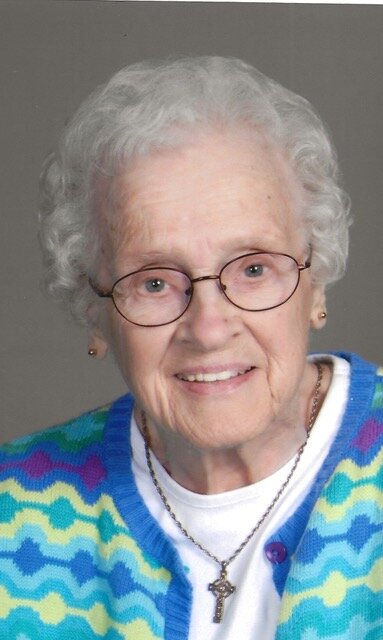 Please share a memory of Jean to include in a keepsake book for family and friends.
View Tribute Book
Jean H. Greer age 94 of Port Jervis, NY passed away peacefully on Friday, January 7, 2022 in Goshen, NY. The daughter of the late Lynn and Lillian Waldron Hubbard, Jean was born on March 28, 1927 in Port Jervis. She graduated from Port Jervis High School in 1945 and from the New York City Foundling in 1949 as an Infant Care Technician, where she worked upon graduation. On June 24, 1950 she married her husband of 60 years, Richard M. Greer, who predeceased her in 2010. After raising her family, Jean returned to work tending to newborns in the nursery at St. Francis Hospital, now Bon Secour, in Port Jervis where she remained until her retirement. Jean was a faithful member of Grace Episcopal Church where she served on the Vestry, organized Christmas bazaars, rummage sales and helped with the Food Pantry. She worked as an election inspector for the Orange County Board of Elections, for both local and library elections and was a member of the Port Jervis Seniors. An accomplished knitter, Jean enjoyed her time spent with the “Knit Wits”, the “Club” and her friends and knitters at the Deerpark School House, where she became known as the “sock lady”. Many family members and friends have benefitted from her wool socks. Jean is survived by her three daughters: Linda, and her husband the Hon. Robert A. Onofry of Port Jervis, Nancy and her husband Stephen Paris of Boone, Iowa, and Ellen and her husband Francis O’Neill of Rockland, Maine, together with her beloved eight grandchildren: Janet and her husband Doug Prundl, Beth Onofry and her spouse Blair Parker, Richard A. Onofry and his partner Amanda Josd, Emily and her husband Andrew Herron, Stephanie and her husband Dr. Kevin Egan, Kyle and his wife Lydia Paris, Kelsey and Connor O’Neill, and her 11 great grandchildren; Tyler, Evan, DJ, Kyle, Zachary, Owen, Eleanor, Sage, Kaed, Ella, and Levi. She is further survived by her sister-in-law, Ruth Chase Greer of Idaho and several nieces and nephews. Jean was pre-deceased by her sister and brother-in-law Margaret and William Kinne and brother-in-law Robert Greer. The family would like to thank Linda Matza for all the care and kindness she gave to Jean in her home over the last five years. They developed a true friendship and respect for each other and Linda was always a bright spot in her day. Visitation will be held 9:30 am - 10:00 am Saturday, May 7, 2022 at the Grace Episcopal Church, Port Jervis, New York. The Mass of Resurrection will follow at 10:00 am.. Rev. Cannon David Lee Carlson will be the celebrant. Interment will follow at Pine Grove Cemetery, Matamoras, PA. Memorial contributions may be made in Jean’s honor to Grace Episcopal Church, 84 Seward Ave, Port Jervis, NY, 12771 or to the charity of your choice. Arrangements are by the Knight-Auchmoody Funeral Home, 154 E. Main St. Port Jervis, NY. For information, directions, or to send a condolence note to the family, visit
To plant a beautiful memorial tree in memory of Jean Greer, please visit our Tree Store

Visitation and Mass of Resurrection

Visitation will be held 9:30 am - 10:00 am Saturday, May 7, 2022 at the Grace Episcopal Church, Port Jervis, New York. The Mass of Resurrection will follow at 10:00 am.. Rev. Cannon David Lee Carlson will be the celebrant. Interment will follow at Pine Grove Cemetery, Matamoras, PA.
Online Memory & Photo Sharing Event
Online Event
About this Event

Share Your Memory of
Jean
Upload Your Memory View All Memories
Be the first to upload a memory!
Share A Memory
Plant a Tree